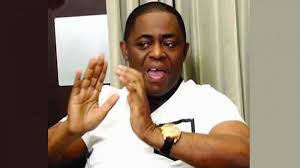 Aba Kyari was a good man, says Femi Fani Kayode
By Samuel Ogunsona
Former Aviation Minister, Chief Fani Kayode has described the late Chief of Staff to President Mohammadu Buhari as a good man.
Fani Kayode one of the most outstanding critics of President Buhari’ s government said he has been a friend of the late COS, Aba Kyari  for about 40 years having been classmates at Cambridge University in the United Kingdom.
Kyari had tested positive to Coronavirus some two weeks ago. His death is expected to change the power equation in Nigeria. Fani Kayode said in his tweet “
have lost a friend of 40 years. We were at Cambridge together. We worked in my fathers law firm together. We remained close throughout right up until the end even though we disagreed politically. Abba was a good man: a man of honor and a loyal friend. May his soul rest in peace”
Meanwhile, the Senior Special Assistant on Media to the President, Garba Shehu wrote in a statement made available to Irohinodua
“We just received the body of Abba Kyari the deceased Chief of Staff the President in Abuja. In strict observation of the protocol put in place for the burial of Coronavirus victims by the National Centre for Disease Control, (NCDC) and the Federal Ministry of Health”
He said further “the funeral prayer and burial will be private. Thereafter, there will be no such ceremonies as condolence visits.”
He said well meaning friends, family members and the general public are encouraged to pray for the repose of Abba Kyari’s soul.”