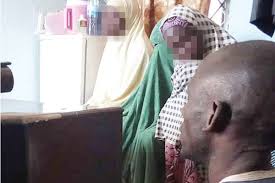 Katsina housewives that were chained for 10 months seek divorce.

Fatima Salisu and Hadiza Musa, was locked up and chained for 10 months by their husband Mr. Samaila Musa which occur to happen at Rimi Local Government Area, Katsina State.

The two housewives who were chained for 10 months are seeking divorce at Katsina Upper Sharia Court. The housewives told the Upper Sharia High Court that Musa starved, preventing them from interacting with friends, their family members for unknown reason.

The duo through their lawyer Hamisu Malunfashi, told the court that they have more evidence to quash their marriage. The presiding Judge, Ali Ingawa, asked the accused, Musa, who was brought to the court by the police about the accusations.
The suspect, Musa denied the accusations, saying, It was all being framed up against him.

The duo further told the court that if permitted, they were ready to expose other atrocities that Musa allegedly perpetrated against them. The two women, who were present at the court sitting, showed the pictures of their alleged maltreatment. Their counsel, Hamisu Malumfashi, cited several instances in the Holy Quran to justify the divorce request.

The two women, who were present at the court sitting, showed the pictures of their alleged maltreatment. Malumfashi told the court that there were witnesses, including the police, who were ready to testify in the case. Musa, who was also brought to the court by the police, denied all the allegations. He told the court that he was being framed up. The court’s Alkali (judge), Ali Ingawa, adjourned the case till February 20, 2020, to enable the witnesses to testify.