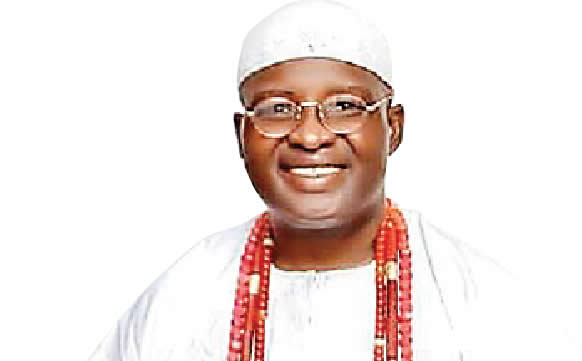 Oore of Otun Ekiti, Oba Adekunle Adeagbo was part of the delegation that represented Ooni of Ife, Oba Adeyeye Ogunwusi, at the unveiling of new Olu of Warri, Prince Tshola Emiko, recently. In this interview with BOLA BAMIGBOLA, he speaks on his experience witnessing the event

Why was Ooni’s intervention in the Itsekiri stool controversy important?

It was very important because the Itsekiri kingdom is part of the Oduduwa nation. The Itsekiri came from Benin, through Oranmiyan from the source, Ile Ife. So, we are all under Oduduwa nation and Kabiyesi, Arole Oodua, Ooni of Ife, Oba Enitan Adeyeye Ogunwusi, the Co-Chairman, National Council of Traditional Rulers of Nigeria, will not want any town under our reverred lineage to be under siege. So, we had to intervene at this criticial time to ensure peace and make sure there is tranquility in Itsekiri land vis-à-vis the entire race.

What was really the crux of the matter on the Itsekiri stool?

The crux of the matter was the nomination. The present Olu of Warri-designate, Prince Tshola Emiko, is a son of Ogiamen, the Olu of Warri before the immediate-past king and they were saying that he was not right for the throne. But then, the entire traditional council, the Itsekiri General Assembly and the entire Council of Chiefs said he has a right to the throne because he is a son and a prince of that dynasty.

You just mentioned that Prince Emiko’s mother is Yoruba; is she from Ile-Ife or where is she from?

Of what significance is the emergence of Prince Emiko as Itsekiri monarch to Ile-Ife?

It is quite significant, because our political sage and father, the late Chief Obafemi Awolowo, was at the enthronement of the father of this present Olu-designate. That was the last official outing he attended before he passed on. The Itsekiri nation is very dear to the Oduduwa dynasty and its quite important that at that critical time, we must intervene to put things aright for the peace and development of several millions of members of the sophisticated Yoruba race worldwide from the Oduduwa kingdom. So, it’s quite critical and I thank God that the intervention was timely.

You said the Yoruba and Itsekiri have common ancestry. Can you speak more on this?

There are five clans that make up the Itsekiri nation. Three from Yoruba, one from Edo and one from Igala, so, that clearly tells you the kind of importance of the Yoruba and the Oduduwa connection to the entire dynasty and when the Itsekiri man speaks, you can see the connection in the language. It is clear and evident that the Itsekiri nation is connected to Yoruba nation and our ancestory has same source from Oduduwa.

Can you speak about the specific charge that the Ooni gave you when sending you on that assignment?

The Ooni is a lover of peace and progress. He is a visionary and he wants everything to be done in peace and harmony and what he sent us to do was to go and see to it that everything done follow due process in terms of traditional norms and when we got there, we observed that people saddled with the responsibility carried that out as tradition demands. We saw  how the passage of the late monarch was announced, showing the end of an era. We also saw the unveiling of the new Olu.  There was a gunshot salute service to show that the Olu of Warri had passed on and that the new one was about to come in. So, our mandate was very clear – peace, harmony and reconciliation. Though in a contest, you will always have people that are angry, but as a leader, you have to reach out to them, because they are all of the same family. There was a need to console them and tell them that we are all going to do this thing together. So, that was the mandate, to make sure that the traditional processes were complied with and also to make sure that all parties work together for the development of the Itsekiri nation.

How were you able to prevail on the decision makers in Itsekiri kingdom to pave the way for Prince Emiko’s emergence?

We didnt intervene like that because some of these things are organic. The people themselves must decide, so what we went there to do was to witness. The entire council had decided, we have met all the chiefs and traditional council, they were all present, they had chosen him (Emiko). We only went there to witness and not to interfere with our presence. It was not as if we went there to choose, no. They had chosen and planned; we met council of chiefs that rejected Prince Okutebo, we were only there to witness and we thank God that what we saw was what we wanted. There was peace and harmony and we thank God and we saw the love and happiness on the faces of the Itsekiri people and it was done in Ode-Itsekiri, the ancestral home and all of them mobilised, and moved there, a sign that Prince Tshola Emiko is popular and he is loved by his people.

Is this the first time the Ooni will be making this kind of intervention?

Not even in Itsekiri, but across Yoruba land, Ooni has always been asked to intervene whenever such intervention is considered necessary.  I can remember in 1903, when there was an issue like that in Lagos and the Ooni had to be called to settle one or two things. By what we read, the white man that was in charge at that time was told that it was only the Ooni that could settle such a matter and the then Ooni told them that he doesn’t  leave his palace. The Ooni also said for every river he crosses, the expatriate must kill a black cow, and the white man agreed. He went for that meeting and resolved the crisis and there was peace. So, I think the Ooni is a father to all Oduduwa sons and daughters worldwide and we thank God for his life, that under his reign, the entire Yoruba nation is prospering, expanding and increasing. He is a leader full of knowledge and wisdom, very agile, very potent and what I will say is that God Almighty will continue to increase him on every side and strengthen him the more.

The Ooni is a father and anywhere there is disharmony, he intervenes and he is just making sure that all parties negotiate and discuss. That is the message of the Arole Oodua and when we got there, that was what we did and we thank God that it was successful.

How did the Ooni feel when you returned with the mission accomplished?

Immediately he heard that we were back, the Ooni was  excited and he was happy that we went at that critical time. The programme was on Monday, April 5, we got there a day before and everything went well, so Kabiyesi thanked God that what we prayed for happened, which is peace. So he was excited that we delivered on our mandate and we thanked God that made it possible.

Will you describe your task as tough or easy?

It was quite tough. It was a Herculean task travelling from Ekiti by road to Warri and also by boat again to the Ode-Itsekiri. But we thank God. It was not an easy journey at all.

If Prince Emiko had been denied his right to the throne, what would that have meant?

We believe that kings are chosen by God, nobody becomes a king by himself. For you to be king, the person must have been ordained, so we believe in the power of our father, Eledumare. The only thing we would have done is to pray for peace and harmony and then reach out. I think that would have been our position.

As one of the prominent traditional rulers in Yorubaland,  who is the Oore of Moba, if you are to describe the stool in few words?

The Oore of Otun Ekiti is the paramount ruler of Moba land and the permanent Chairman of the Moba Traditional Council of Obas and Chiefs.

The meaning of Oore is Oloore and that is Oloore Oduduwa. The kingdom has been around for over 1,000 years and to the glory of God we are deeply connected to Ile-Ife and we appreciate God that the Oore is among the ‘Pelu pelu’ Obas in Ekiti State. I am the great-grandchild of Oore Okinbaloye, that signed the Ekiti Parapo Kiriji war peace treaty in 1886. He was the one that led all other Pelu-pelu obas to end that war. So, we have a very rich history in Yorubaland and we are for peace, tranquillity, progress and we are happy that we want the Yoruba race to excel. The Yoruba race has several millions sophisticated people worldwide and we are doing exploits all over the world.

Police locked up farmers whose farms were destroyed by Wakili and took N50,000 for bail– Ayete youth leader