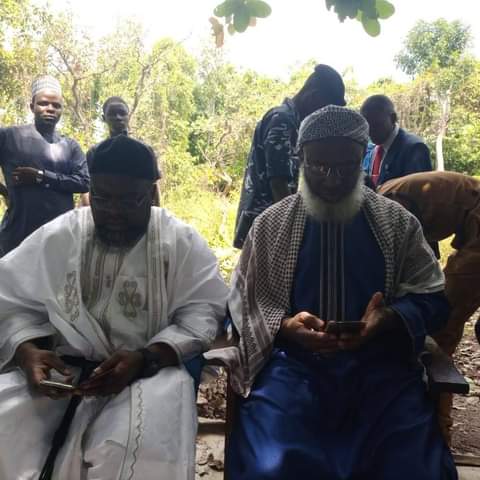 The tour of Yoruba territories in Kogi State by Islamic leader, Sheik Abubakar Gumi has been described as a threat to security and wellbeing of Okunland.

In a statement issued on Wednesday and made available to Irohinoodua, Okun Peace, Security and Unity Alliance, (OPSA) signed by Yusuf Kolawole Maba said the tour of Yoruba forests by Gumi has raised serious concern among indigenous Yoruba peoples in Kogi State.

The group said it is troubled by the forceful occupation of Yoruba Land by armed herdsmen in large numbers and that each time they are accosted by Yoruba owners of the land they were rebuffed that the land was given to them by the Sultan of Sokoto. The group said territories being occupied by the armed herdsmen belong to Yoruba people adding that kidnapped people are taken into the seized land. OPSA wondered why Gumi should pat a visit to a “den of terrorists” in the name of medical outreach.

The statement titled “Gumi’s tour of Okunland: A threat to Public Peace and Security in Yoruba Territories in Kogi State” Gumi has clearly shown that he is the official ‘Ambassador – At – Large’ for the terrorist herdsmen and the caliphate oligarchy in the North who have declared their mission to take over the territories within the map of Nigeria.

“Gumi is moving about with a strong team of security operatives; and this is a pointer to the intelligent world to know who appointed the self styled Sheik and the mission he is commissioned to execute” the group said.

OPSA said on his arrival in Okunland, Gumi did not pay courtesy visit to any of Yoruba traditional rulers in the communities that he visited, on his way to the Yoruba forests where he went to have meetings with his gun carrying herdsmen

The group said wondered why he chose to conduct his so-called medical outreach in the forests away from the host communities that have been rendering medical services to his herdsmen without discrimination.

“Why did he chose to conduct his business deep in the night under the cover of thick darkness” the group asked.

OPSA noted that on his team, there were no medical practitioners to the knowledge of the reluctant hosts.

OPSA wants the International Community to probe widespread speculations that delivered military hardwares have been enriched to the benefit of the Fulani herdsmen hibernating in the forests on the basis that they needed same for their own protection.

The group asked “Can Gumi prove to us that those forests being occupied by the terrorist herdsmen had been given to the Fulani long ago by Sir Ahmad Bello? Because, that is what the terrorists are claiming whenever our people challenge them.”

The group wondered why the state governor, Yahaya Bello, gave out the land of the indigenous people to foreigners without the due consent of the host communities and worse still, have even gone ahead to gazette those lands as RUGA settlements with the deep insult of giving the locations other names different from what the communities are customarily known for.

OPSA said “One such a RUGA is called, ARDO ZUBAIRU. As at this moment of writing, It may interest the public to know that, there are two people who were kidnapped by the herdsmen on Sunday,21/11/2021, on the Ayere – Ondo highway that are yet to regain their freedom. The captors are demanding the sum of #30million for each person to be released.
These are the criminals that clergy Sheik Gumi is defending with his Fulani Rights Concern outfit. And as well taking medicare outreach to.”

The group commended the selfless efforts of Yoruba community vigilantes and the leadership of Okun Development ASSOCIATION, ODA, especially the President, Barrister Femi Mokikan for their resilience I the face of arrogant provocation.”

It added “We also wish to respectful encourage our Kabiesi all over OKUN land to cooperate and work together with us to checkmate the Gumi’s plot. Okunland must not be taken over by the terrorists and their sponsors. This is your land where you rule.”

OPSA said it will “work together with our people in the larger Yoruba Nation to protect our cultural heritage, land and life with all the means available to us. We demand that governor Yahaya Bello must stop any further encouraging intruding and trespassing terrorists from terrorizing our people and taking over our land, just because we Okun people are peaceful.”

OPSA said the group has being monitoring events concerning the security of Yoruba people of Kogi in the recent time given the generally highten violence ravaging most parts of Nigeria, especially the North Central where the Okun people have been badly exposed to a minority status and hopeless enslavement by the Northern oligarchy.

“We have been highly disturbed about the spilling over of nearly unchecked violence ravaging the neighbouring states of Benue, Ekiti, Ondo and the even the Yoruba hinterland.”

OPSA said it is worried that the problems of insecurity in Okunland and Kogi state in general may become worse is now more evident by the manners of Gumi’s ongoing surveillance and reconnoitering and provocative statements about RUGA settlements (one of which is, ARDO ZUBAIRU) exclusively for the Fulani herders been gazetted by the state governor, Yahaya Bello.”