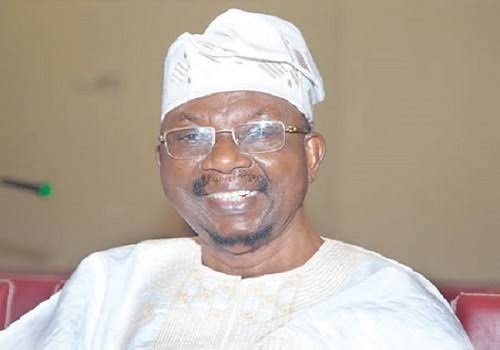 “A thousand ages in thy sight, are like an evening gone, short as the watch that ends the night before the rising sun. Time, like an ever-rolling stream Bears all its sons away” – Isaac Watts, 1674 -1748, English Poet and Hymn Writer ……Psalm 90

“Death, the only immortal who treats us all like, whose pity and whose peace and whose refuse are for all— the soiled and the pure, the rich and the poor, the loved and the unloved”—Mark Twain (Samuel Langhorne Clemens) 1835 -1910, American writer

How does one express the amazing essence and spirit of Senator Augustine Olabiyi Durojaiye, mni, for his selfless generosity, uncompromising belief in all that is good and his unwavering commitment to family and friends? Words, even the very best words, cannot pay tribute or truly capture the sense of loss that we are all feeling today.

The loss is there, tangible and real within everyone, children, immediate family members, associates, friends and his main constituency, the National Democratic Coalition, NADECO but Sen Durojaiye, who exemplified life, love, laughter and irrepressible belief and faith seeing the best in everything he was associated with, even loss.

We remember Sen. Durojaiye as a Grandfather, Father, Brother, Uncle, Associate and a Colleague who by dint of God’s endowment went to one of the best educational institute, and obtained a B.sc (Economics) London and an LLB London respectively. He was also a graduate of the National Institute for Policy and Strategic studies Kuru. He worked for 35 years in the Nigerian Public Sector, including 28 years as a Director of the Central Bank of Nigeria and the National Mint. He equally worked with the International Monetary Fund and the Federal Reserve System in the USA and the City University, London between 1964-1982.

Sen. Durojaiye was an elected member of the 1988/89 Constituted Assembly under the never-intended to produce democracy transition agenda of Gen. Babangida. In 1992, he was a candidate to run for President of Nigeria on the platform of the Social Democratic Party (SDP), losing to Chief M.K.O Abiola. Abiola’s subsequent election as President in June 1993 was annulled by Gen. Ibrahim Babangida. After Babangida was literarily forced out to step aside, he set up a contraption called Interim National Government led by Chief Ernest Shonekan who was easily sholved aside from office by Gen. Sani Abacha.

Gen. Abacha’s repressive Military Junta unleashed terror on NADECO leaders and members as well as the general public. Sen. Durojaiye was then detained for about 560 days, mistreated and dehumanized while he was being kept at one of the most dehumanizing and dangerous military underground detention centres in Lagos, known as Military Interrogation Centre, Apapa, Lagos.

After the sudden departure of the most violent military dictator Gen. Abacha, Gen Abdulsalam Abubakar who became the new Military ruler released him and others as well as set up a short transition programme.

Sen. Durojaiye was then elected a Nigeria Senator of 1999-2003 and served as Chairman on a committee and on others as a member. As a father, colleague, Sen. Durojaiye will be deeply missed. In the years that lie ahead, I’m sure his surviving children will always remember how he nursed, financed, taught, disciplined them and above all, his infectious love and affection for them until he recently translated to the second address will remain evergreen.

Senator Durojaiye was not only bold and courageous, he was a stickler for values and conventions which made him one of the best nationalist, gentleman, elder statesman that Nigeria ever produced.

Sen. Durojaiye was a loyal compatriot and colleague to all who were connected with him and a special friend to many of us including those of us who were younger as we recall special moments of our shared joint oppression, dehumanization, hounding and humiliation by the violent military dictator. Gen. Sani Abacha as a matter of historical fact had virtually signed and sealed his selfish agenda to transmute from his military dictatorship to a farcical civilian ruler through chicanery, deception and misuse of government instrument of coercion to impose himself on Nigeria as the sole candidate of his infamous five fingers of a leprous hand called political parties, but for divine intervention of June 1998.

Senator Olabiyi Durojaiye, we will remember you with all your special nuances and our memories from all the days gone before that we were privileged to share with you in joy and sorrow, in happiness and sadness, in freedom and incarceration in our quest to secure for our nationalities, their God given human rights and liberties.

And today we’ll grieve for you and cry for missing your needed contribution to our joint projects to liberate majority of Nigeria from this suffocating geographical space and even smile because of you for being a courageous and bold leader who until, you were recalled by your maker remained a credible voice. In fact your last intervention on National affairs was contained in a full page advertorial on the state of the Nation as contained in one of the Nation’s Newspapers in May 2021.

It is of public knowledge that you were an ardent believer in the following immortal words about human liberty.

An Anonymous writer in his proverb stated that “Lean liberty is better than fat slavery, Tis liberty that everyone lives”.

John Philpot Corren, 1750-1817, Irish Lawyer and patriot said “The condition upon which God hath given liberty to men is eternal vigilance; which condition if he break, servitude is at once the consequence of his crime, and the punishment of his guilt”.

Thomas Jefferson, (1743 -1826) 3rd President of the United States said “The God who gave us life gave us liberty at the same time” (Summary View of the Rights of British America).

Your NADECO comrades and colleagues will remain more determined in our titanic battles to secure for our nationalities, their humanity, their freedoms, their liberties, their natural rights as enshrined in the Universal Declaration of the Human Rights contained in the 1948 United Nation’s protocols as well as the African Charter of Human and Peoples Right which has the following unique features. “The Charter recognizes the indivisibility of all rights. All generations of rights are recognized. Social-economics rights are justiciable; clearly, collective rights, environmental rights, economic and social rights are essential elements of human rights in Africa. Furthermore, the African Charter does not contain any derogation clause”. And Nigerian has domesticated the above internation laws and charter as binding on Nigeria but our oppressive rulers in Khaki and Agbada have been shameless violators of what they sworn to uphold.

Albert Einstein said, “The value of a man should be seen in what he gives and not in what is able to receive.” In one word, Senator Olabiyi Durojaiye was a man who gave. He gave much to his work as a Director of the Central Bank of Nigeria, Chairman, National Communication Commission, NCC, Barrister and Solicitors, Political activist etc. That is why ladies and gentlemen we are gathered here to say goodbye to him, I would like to declare that this is a celebration of his life. Here was a life that demanded notice, a life that exemplified brilliance, a life that inspired emulation, a life that burned so that others path were lit.

Ladies and gentlemen, permit me to quote this anonymous poem in this brief testimony:

“Life is but a stopping place, a pause in what’s to be,
A resting place along the road, to sweet eternity
We all have different journeys, Different paths along the way
We all are meant to learn some things, but never mean to stay
Our destination is a place, far greater than we know
For some the journeys quicker, for some the journeys slow
And when the journey finally ends, we’ll make a great step forward
And find an everlasting peace, as our special reward.”

Adlai Stevenson, the US Ambassador to the United Nations (1961-65), once commented about a man and his contribution: “It is not the years in a life that counts; it is the life in the years.” Ladies and gentlemen, Distinguished Senator Durojaiye had passed through Nigeria gracefully. We will miss him. Revd. Bukola Ogunkanmi; Arch. Abimbola Olaolu Durujaiye; Mrs. Bolaji Balogun and Barr. Babafemi Durojaiye in particular will miss your fatherly care but they are comforted with the golden legacy you have left for them. Goodbye, our beloved Senator Augustine Olabiyi Durojaiye, the Otunba Kolawolu of Ijebu-Igbo. May your soul Rest in Peace and may your children, family members, friends and colleagues like us receive divine balm from Gilead to soothe our pain.