An elite cyclist has been stabbled by street boys in the Anthony area of Lagos.

The incidence took place on Wednesday.

Afolabi Mabogunje whose wife is a medical doctor fought hard racing to the Gbagada General Hospital for help that came too late. He died.

Mabogunje was reputed for his long tradition if cycling in Lagos alongside many of his friends, a past time he treasured for decades.

Sources told Irohinoodua that he was stabbled by a boy among a leap of street urchins notorious for hibernating under the Anthony bridge.

“It was a case of robbery. They are known for attacking people and dispossesing them of their property. He was stabbed in the neck. He manged to hold on to the point of bleeding racing to Gbagade Hospital. But it was too late,” the source told Irohinoodua. 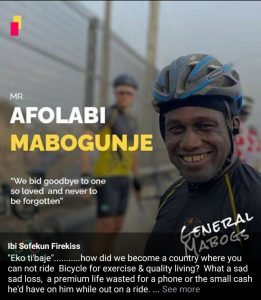 At the devil’s point where he was stabbed, one artisan who works under the bridge said the rogues who occupy the area are noted for robbery and rape of women and girls.

“No one is safe. The area is a crime hot spot. There have been cases of women raped or people violently robbed” Alhaji Abiodun Ojikutu who manages a mechanic workshop in the area told our reporter.

A source at Gbagada General Hospital said Mabogunje was transfered to the Lagos University Teaching Hospital for surgery but that he died before any attempt could be made to save his life.

A police officer who spoke to Irohinoodua on condition of anonymity said the Anthony under bridge used to be a save haven for armed robbers. He said that changed after Shodex Garden beautified the place. “We have not had any reported case of armed attack under the Anthony Village bridge. It used to happen everyday until Shodex took over the place from Rotary Club.”