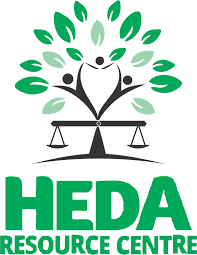 The Cable had reported that police have indicted the HEDA Chairman on emails alleged by some of the accused to have been forged.

One of the main suspect is former Petroleum Minister Dan Etiebet who hired a lawyer and former Nigeria’s Attorney General and Minister of Justice, Mohammed Bello Adoke to petition HEDA based on the group’s widespread campaign and litigation aimed at bringing crime suspects to book at Courts in Milan, Italy.

In a statement on Wednesday, made available to Irohinoodua, HEDA Executive Secretary Suleiman Arigbabu urged journalists to uphold the ethics of the profession and avoid being used by vested interests to the detriment of public good.

HEDA said the report by online medium, The Cable claiming police have indicted Mr Suraju based on a “report’ by the IGP Monitoring Unit of the Nigeria Police Force were false.

HEDA said the intention of the sponsors of the fake report is to distract public attention from the subject matter of an investigation that is already receiving professional attention of the IGP Monitoring Unit, the Interpol and Cybercrimes Unit of the Police Force.

HEDA said two journalists, one from the Cable News and the another from The Nation called Mr Suraju to get his reaction to the purported police report and claiming to have received a certified true copy of same.

The group sad Mr. Suraju declined to give any comment since he was unaware of any such report.

“An mmediate reach out to the IGP Monitoring unit dismissed the existence of any such report. Of course for an average discerning mind and professional reporter, it is basic reasoning to detect this report is fallacious, unprofessional, distractive and poorly concocted by its producers” Arigbabu said urging journalists to realise that the fight against corruption is one of its core responsibilities.

Giving details, the foremost anti-corruption group said the Police IGP Monitoring Unit had invited Mr Olanrewaju Suraju, in his capacity as Chairman of HEDA Resource Centre on 27th March 2021, based on a petition by a lawyer, Kanu Agabi on behalf of Mr. Bello Adoke, SAN titled “Forgery of Document for Unlawful Purposes of Interference with the Course of Justice”.

It said though, the name of HEDA Resource Centre or Mr. Suraju was not mentioned in the petition, the invitation was received by the organization in good faith and as an opportunity to assist the police in its investigation.

It said contrary to the claims of non- appearance to refute allegations in the fake indictment report, Mr. Suraju has been officially invited and visited the IGP Monitoring Unit, at his own personal flight and hotel accommodation expenses, and made statements six times between April 1st and today, with the last visit being on Friday 27th August, 2021.

“On each of this occasion he has had to bear the cost of flights, taxis and hotels for his trip. The first visit, wherein Mr. Suraju was detained and eventually released on bail is in the public domain” the group stated.

“It is important, as a reminder to the public, that the subject of the petition was forgery of an email in which Nigeria as a sovereign State was shortchanged to the tune of $1.1billion (one hundred and one billion US dollars) and HEDA and its international partners have been involved in the advocacy for recovery of this money and prosecution of principal actors behind the heist” the group said.

It added that to the delight of HEDA and its partners, Nigeria has recovered $75m of this money and the processes for the recovery of the balance are subjects of judicial processes in both United Kingdom and Italy.

“Every other fabrication of ‘cyber stalking, giving false information to “misled” public officer, injurious falsehood and criminal defamation with intent to incite’ can only exist in the imagination of the purveyor of the fake report and their collaborators in and out of government.” Arigbabu said.

HEDA said confirming its legal status through the Corporate Affairs Commission, (CAC) is as simple as visiting the website of the Commission, even for journalists and media houses, just like the IGP Monitoring Unit did in the presence of Mr. Suraju during one of his visits.

The group said though, the legal status and background of the organisation was not the subject of investigation as contained in the petition.

It argued that since its registration on 24th February 2004, HEDA in its legal capacity as an incorporated body of trustees has instituted several legal actions at local and international levels, reserved for only organizations with a legal status conferred.

Accoring to the rights group, HEDA do reckon, as an organsation, that some despicable characters who obviously are feeling the heat of the investigations and afraid of the potential outcomes have suddenly become jittery, especially with the overwhelming evidence and materials supplied by HEDA to the Police System in the course of this investigation.

“We wish to thank all those who have called the organisation’s management and to express their solidarity and concerns. We shall continue to pursue every legitimate and legal process to see this matter to a logical conclusion and ensure Nigeria recovers its criminally diverted fund from all those beneficiaries of proceeds of criminal activities. Our lawyers are also reviewing some of the media reports for actions considered necessary” HEDA said