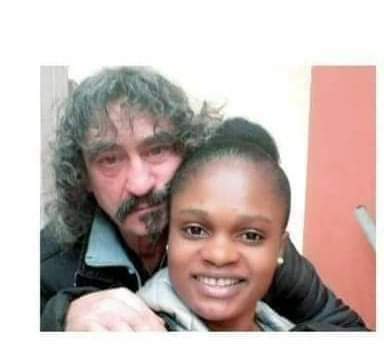 New Revelations On Why Nigerian Lady Was Killed By Her Italian Husband In italy.

A very reliable source in Italy hinted on the condition of anonymity and made some startling revelations on the incident.

According to her, Rita came to Italy in 2017 as an illegal immigrant and was rescued at the sea and taken to a refugee camp

In 2018 Pierangelo Pellizzar met her, married her and took her out of the refugee camp.

Not too long after, she was granted citizenship (the Italian passport) which enabled her get a good job.

Meanwhile, before moving to Italy, she already had 3 kids back home in Nigeria.

Recently, she travelled to Nigeria and got married to the father of her three kids

Before she returned, her best friend went and revealed to the white man that his wife is cheating on him and has gotten married in Nigeria to the father of her children .

She told the white man that he should watch out because as soon Rita returns, she’ll file for a divorce.

And that was what Rita actually did, she filed for a divorce as soon as she returned. She planned to divorce the white man and relocate her Nigerian husband and children to Italy.

Her Italian husband would not hear of it. But all attempts to convince her to change her mind were rebuffed.

On the day of the crime, he traced her to her office, shot her four times in front of her colleagues before handing himself over to the police.

Investigations showed that he is a drug addict who has been in and out of jail severally.

Pierangelo Pellizzar was previously banned from acquiring firearms, but it was not clear how he was able to lay his hands on the gun he used in killing Rita Amenze

The Nigerian Ambassador to Italy, the Nigerian Community in Italy as well as the Executive Chairman of Nigerian Diaspora Commission Hon Abike Dabiri Erewa have called for a thorough investigation into the incident.