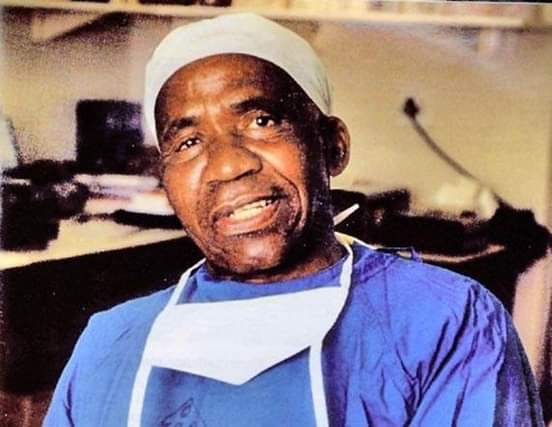 Cape Town’s uneducated surgeon Mr. Hamilton, who was awarded the honorary degree of Master of Medicine could neither read nor write. Let’s see how this is possible.
Cape Town Medical University has a leading position in the medical world.
The world’s first bypass operation took place at the same university.

Master of Medicine, the honorary degree was awarded to someone who has never seen the face of s school in his life.
Who could neither read an English word nor could write …..

But one morning in 2003, world-renowned surgeon Professor David Dent announced in the university auditorium: “Today we are awarding an honorary degree in medicine to the man who produced the most surgeons in the world.” Who is an extraordinary teacher, and an amazing surgeon, and who studied medical science and surprised the human mind.

With this announcement, the professor took the name “Hamilton” and the entire auditorium stood and cheered the Doc.

It was the biggest reception in the history of this university.

Hamilton was born in Sanitani, a remote village in Cape Town. His parents were shepherds, he wore goat skin, and he walked in the mountains barefoot all day, as a child, his father fell ill, so he left the sheep and goats and moved to Cape Town. Construction was underway at the University of Cape Town in those days.
He joined the university as a labourer. He would send home as much money as he could get after a hard day’s work and he used to sleep in the open ground by chewing gram himself.
He worked as a laborer for many years. The construction process ended
He got the job of mowing the tennis court, ……..
He arrives at the tennis court every day and starts mowing the lawn. ……
He did this for three years …
Then came a strange turn in his life
and He reached a point in medical science where no one else has ever been.

It was a mild, warm morning. “Professor Robert Joyce, researching giraffes, wanted to see:
“When a giraffe bends its neck to drink water, why doesn’t it have a seizure?”

They laid a giraffe on the operating table, knocked him unconscious, but as soon as the operation started, the giraffe shook its head. So they needed a strong man to keep the giraffe’s neck tight during the operation.

The professor came out of the theatre, ‘Hamilton’ was mowing the lawn in front, the professor saw that he was a healthy young man of strong stature. They beckoned him and ordered him to grab the giraffe’s neck. “Hamilton” grabbed his neck.

The operation lasted eight hours. During this time, the doctor continued to take tea and coffee breaks, however “Hamilton” he stood holding the giraffe’s neck. When the operation was over, he quietly went out and started mowing the lawn.

The next day the professor called him again, he came and grabbed the giraffe’s neck and stood up, after which it became his routine. , He worked double for many months, and niether did he demand some compensation for this additional duty nor did he complain.

Professor Robert Joyce was impressed by his perseverance and sincerity and “Hamilton” is promoted from a mowing the tennis court to “lab assistant.” He now came to the university, went to the operating theatre and helped the surgeons. This process continued for years.

In 1958 came another turning point in his life. This year Dr. Bernard came to the university and started heart transplant operations.

“Hamilton” became his assistant, during these operations, he went from assistant to additional surgeon.

Now the doctors operate and after the operation, he was given the task of stitching. He used to do excellent stitches. His fingers were clean and fast. He stitched fifty people in one day. While working in the operating theatre, he began to understand the human body more than surgeons . So the senior doctors gave him the responsibility of teaching the junior doctors.

He now began teaching surgery techniques to junior doctors. He gradually became the most important figure in the university. He was unfamiliar with the terms of medical science. But he was the best surgeon in the world.

The third turning point in his life came in 1970, when research on the liver began this year and he identified one such liver artery during surgery…. which made liver transplantation easier.

His remarks astonished the great minds of medical science.

Today, when a person has a liver operation in some corner of the world and the patient opens his eyes and sees the light the reward for this successful operation goes directly to “Hamilton”.

“Hamilton” achieved this position with sincerity and perseverance. He was associated with the University of Cape Town for 50 years, in those 50 years he never took a vacation.
He would leave home at three o’clock at night, walk 14 miles to the university, and he would enter the theatre at exactly six o’clock. People used to fix their watches with his time.

He received an honour that no one in medical science has ever received.

He was the first illiterate teacher of medical history.
He was the first illiterate surgeon to train 30,000 surgeons in his lifetime.
He died in 2005 and was buried at the university and It was then made compulsory for surgeons to pass out from the university after obtaining that degree go to his grave, take a picture and then get into practical life …. ”

*”You know how he got this position.”*

It was a yes and an extra eight hours of hard work that opened the door to success for him and he became a surgeon.

“Most of us have been looking for a job all our lives. While we must find work. ”

Every job in the world has one criterion and the job is available only to those who meet the criteria whereas if you wanted to do work, you could start any work in the world in a few minutes and no power in the world would be able to stop you.

“Hamilton” had found the secret, he gave important to work rather than job. Thus it changed the history of medical science.

Imagine if he had applied for a surgeon’s job could he have become a surgeon? Never, but he put the hoe down and held the giraffe’s neck and became surgeon.

There are unemployed people who fail because they just look for a job, not for work.
The day you started working like “Hamilton” you will win the Nobel Prize and will become great and successful human beings.