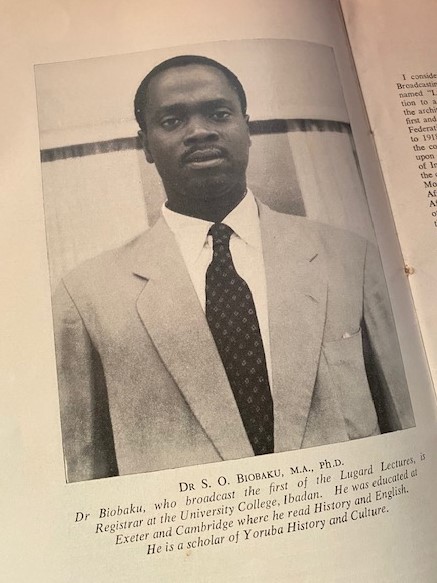 In Nigeria today, and indeed throughout West Africa, there are outstanding women traders who are fulfilling the important role of middlemen in commerce and wielding enormous influence in the affairs of their towns and country. Many of them achieve fame and some a certain measure of immortality. Madame Tinubu, one of their best-known forerunners, certainly achieved both. Tinubu Square in Lagos and Ita Iyalode (Iyalode Square) at Abeokuta both testify to her genius. To her undoubtedly belongs an honoured place among eminent Nigerians of the nineteenth century.

Madame Tinubu, like many a genius, sprang from humble beginnings. She was born in the Egba Forest and it was said that her mother was a seller of breakfast maize porridge and her father probably an Owu man. After serving the customary apprenticeship in trade with her mother, she went to seek her fortune on the coast at Badagry. She quickly made her mark there and built up a lucrative trade in salt and tobacco. There also she first came into contact with the slave trade and the Brazilian slave dealers for whom she acted as a middleman.

So, by the time Akitoye, the dis¬placed King of Lagos, reached Badagry via Abeokuta about 1846 Tinubu was firmly established there. It will be remembered that Akitoye’s mother was probably an Owu woman and Tinubu recognized this bond of kinship with the exiled king immediately; she espoused his cause and used her wealth and influence in Badagry to build up a faction dedicated to the support of Akitoye and his return to his lawful throne at Lagos. Everywhere, Tinubu became known as Akitoye’s niece and his mainstay against the intrigues of his nephew and supplanter, Kosoko. Thus when, after Consul Beecroft’s intervention in Badagry in 1850 and the successful action taken against Kosoko in Lagos in 1851, Akitoye returned to Lagos it was natural that Tinubu should follow him there.

At Lagos Tinubu became the power behind Akitoye’s throne; she transferred her trading establishment there and became a leading middleman between the European traders at Lagos and her own kinsmen and women in Abeokuta.

People became jealous of her influence with the king and in 1853 two chiefs of Lagos rose in rebellion, allegedly in opposition to her growing dominance over Akitoye. When Dosunmu succeeded Akitoye, his father, in 1853, Tinubu’s influence with the king grew even greater; for Dosunmu was not a strong character and he came to rely more and more on the advice and support of his masterful ‘aunt’.

Tinubu, however, met her match in the British Consul at Lagos, Benjamin Campbell. He accused her of acting as a middleman between the European and Brazilian slave dealers and the Egba vendors who were using the Oke-Odan route. Whereas the Consul was anxious to encourage the Sierra Leone immigrants (the Lagos Saro) and the amancipados from Brazil and Cuba who had brought new skills into Lagos, Madame Tinubu found in these literate and enterprising people rivals not only in commerce and trade but also in domination over the weak-minded king. Campbell advised Dosunmu to expel Tinubu from Lagos but the Egba authorities intervened and pleaded successfully for her and Campbell relaxed his pressure upon the king.

When Campbell was on furlough in the United Kingdom in 1855 opposition to the Sierra Leone and Brazilian immigrants flared up and Tinubu was again at its head. She and her supporters alleged that the immigrants were using their growing prosperity and influence against the authority of the king and they were introducing rank innovations which were subversive of the ancient traditions of the island.

On his return in 1856 Campbell was determined to deal with the situation. He coerced Dosunmu, who hitherto had professed neutrality, to imprison the leaders of the rising against the immigrants, and Madame Tinubu’s husband was one of them. Incensed at the outrage, Tinubu stalked into the Iga (the king’s palace) and openly upbraided the king, charged him with weakness and demanded the release of her husband. She threatened to withhold her support from him and bring back his more kingly rival, Kosoko, from Epe.

Campbell came to the rescue of the king who was still reluctant to break with his formidable ‘aunt’; the Consul called in the gunboats and Dosunmu was compelled to authorize Madame Tinubu’s expulsion in May 1856.

King Dosunmu had good reasons for his reluctance to let Madame Tinubu depart from Lagos. She was then the leading middleman in the interior trade at Lagos and many of her trade creditors attempted to shelter her.

In the credit or trust trading system which obtained then as now, she was a ‘debtor’ to the tune of over £5000 advanced to her for palm oil by various merchants. Her expulsion from Lagos, therefore, would mean certain financial loss to her creditors on the one hand, and loss of badly needed support for some influential citizens of Lagos, such as Turner, a Sierra Leone immigrant, on the other.

Tinubu’s hope of Consul Campbell’s relenting was, however, disappointed and, after loitering around Lagos for a while, she was escorted to Abeokuta at the Consul’s expense. Campbell congratulated himself for breaking a great middleman monopoly of trade at Lagos; but, in fact, he had only unwittingly planted at Abeokuta an influential Lagosian emigrée who could foment dissension between the Egba and the authorities at Lagos.

Arriving at Abeokuta, Tinubu settled in the Owu quarter. With her unfailing business acumen and enterprise, she quickly established a flourishing trade in gunpowder, bullets and other weapons of war. She built up her house into a salon where disgruntled Lagosians congregated and planned to avenge themselves on the interfering Consul at Lagos.

Before long, however, Madame Tinubu’s thoughts and energies were diverted into other channels. The warlike Dahomi were continually threatening Abeokuta, her native home and political refuge, with annihilation, especially since their unexpected and unaccustomed defeat in 1851. Another invasion was imminent in 1863 and Tinubu was foremost among those who were organizing the defence.

When the attack did come in 1864, her compound was converted into a veritable arsenal from which arms and ammunitions were issued to the Egba forces on their way to the front. Then she took up a position at Aro Gate, nearer the front, at which the wounded were nursed by her and her female associates, where soldiers whose powder had been exhausted in battle replenished their store and from which any would-be deserters were sent back with a renewed determination to fight the Dahomi and save the Egba metropolis from destruction.

Needless to say that with such home-front action in bolstering up morale, the Egba drove back the Dahomi, with heavy losses to the enemy, and by their second victory they dealt a severe blow to the Dahomian prestige from which King Gelele and his followers never recovered.

For their part, the Egba recognized the immense contribution which Madame Tinubu had made towards their decisive victory and they rewarded her in 1864 with the title of Iyalode or First Lady. She acquired thereby a constitutional right to a voice in Egba affairs which strengthened her influence greatly. She thus had in Abeokuta a status which she never possessed in Lagos and one which afforded her every scope to indulge again in her past game of being the power behind the throne.

The opportunity came in 1869 when there arose contestants for the vacant title of the Alake. Ademola, one candidate, enjoyed the support of the traditional authorities while the other, Oyekan, had the backing of the emerging educated elements and the influential Madame Tinubu, the Iyalode. Tinubu and her associates eventually lost and Ademola I was recognized as the Alake but the Iyalode refused to be beaten and her faction withheld support from the acknowledged Alake.

Her opposition weakened the new regime and unfortunately contributed to the ineffectiveness of the Egba authorities just at the time when they needed a united front to withstand the inevitable consequences of the annexation of Lagos by the British. When, however, Ademola I died in 1877, Madame Tinubu again put forward her candidate for the throne, Oyekan, and this time she was successful and Oyekan was installed as the Alake in 1879. Tinubu assumed her accustomed role of the power behind the throne at Abeokuta. She was, therefore, at the height of her influence when she died in 1887.

Madame Tinubu’s claim to an honoured place in the annals of Nigeria was acknowledged by her contemporaries. Tinubu died childless and among the Yoruba the sting of childlessness is most keenly felt in contemplating death; for one’s children are most in evidence during funeral ceremonies. When Madame Tinubu died, the Egba rose to a man to perform her filial duties and she was accordingly given a veritable state funeral. All the Egba mourned her death but also celebrated her fame as befitted a true heroine.

Nor has that fame tarnished much in retrospect. She was the forerunner of many distinguished women traders in Nigeria who, despite their illiteracy and lack of formal education, are responsible for an astonishing turnover of goods and have preserved a trading integrity which is the bedrock of the trust system. She may have traded in slaves, as Consul Campbell alleged, but so did many others in that era of transition towards legitimate commerce.

Her achievement in trade alone was impressive. But she added to it a taste for politics which in those days involved intrigues and the manipulation of rivals and puppet kings. Foiled in Lagos by a vigilant Consul, Madame Tinubu established herself at Abeokuta, and by demonstrating her patriotism in the defence of the Egba citadel against the Dahomi she won for herself a dominant place in Egba affairs.

When finally she placed her chosen candidate on the throne of the Alake, her success was complete. And in all these, she vindicated the capabilities of Nigerian woman-hood.

Source: From the International Centre For Yoruba Arts and Culture

2023: What Nigerians expect from the next President